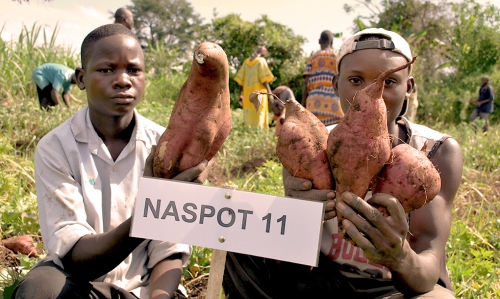 A team of scientists from Makerere University School of Agricultural Sciences working with Abeteraine Farmers Group in Hoima District,

The selected elite sweetpotato lines are expected to benefit farmers, as they are high yielding, drought tolerant and disease resistant.

Some of the Kabanyolo improved sweet potato varieties.

Prof. Samuel Kyamanywa the project principal investigator and Dr. Settumba Mukasa are implementing project 2 activities in Uganda focusing on evaluating and deploying improved varieties of cassava, potato and sweetpotato that are adapted to climate change in diverse agro-ecologies, and developing and institutionalizing efficient seed multiplication and delivery systems in eastern Africa. The project will contribute to improved and sustainable cassava, potato, and sweet potato production.

To deliver elite sweet potato lines, Prof Samuel Kyamanywa’s team employed the farmers participatory approach in the selection process and on-farm trials – crucial to the success of the KSP series.

The farmers compose the Abeteraine Farmers Group, which was founded in 2008. This society is a union of over 30 farmers who specialize in growing maize and sweet potato. This farmers’ group is based at Gorooba Village, Kyabigambire Sub County in Hoima district.

In 2012, Dr. Mukasa and his graduate assistant, Mr. Anthony Mwije, linked up with Abeteraine to deliberate how project 2 would collaborate with the farmers’ group to implementing on-farm trials for the sweetpotato clones the researchers wanted to test.

The farmers were enthusiastic about the project and provided labor and managed the trials under the scientists’ guidance. The Makerere team then planted 20 sweet potato clones. These were planted in three separate agro-ecological zones. This experience provided the farmers with good agronomical practices and knowledge in cultivating sweetpotato.

During the field day in November 2013, the farmers got to choose agronomically superior lines and organoleptic acceptability, through the 9-point hedonic scale – a widely used scale for evaluating food acceptability. Eleven most promising KSP clones are being cleaned for further variety testing in advanced yield trials that will be carried out this year. Field performance data will be submitted to the variety release committee for full-scale promotion this year.

“This was a big project looking at three crops: cassava, potato and sweetpotato. The overall objective was to come up with new technologies for producing these crops under the changing environment. The process involved not only looking at varieties that are high-yielding, but also resilient to different environmental conditions like drought, excess water and diseases,” Prof. Kyamanywa emphasized.

Sweet potato, cassava and potato have increasingly been affected by pests and diseases exacerbated by climate change.

The project is working with Biocrops Uganda Ltd, a private Biotechnology Company that owns a tissue culture laboratory to produce clean planting materials from the new and clean sweet potato varieties. The multiplied vines will then be distributed to farmers through a system that will also be operationalized for production of sweetpotato quality declared planting material in three districts in Uganda. This is an innovative seed delivery system for clean planting materials for sweet potato and cassava that Bio-Innovate is testing in partnership with the private sector.