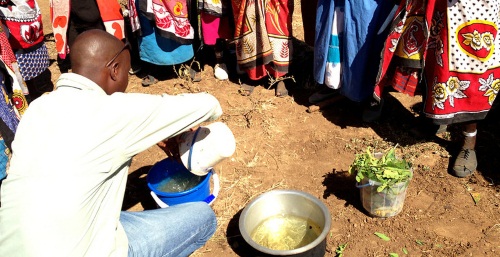 When bio-pesticide experts met in Nairobi recently, their objective was to review regional policy and legislation on biological pesticides, which are emerging as an important option in pest and disease control.

Bio-pesticides not only offer the promise of contributing to improved crop yields for the farmers, but are also environmentally-friendly, compared to chemical pesticides that are currently in use.

The meeting brought together 40 experts from Kenya, Uganda, Tanzania, Ethiopia and Burundi seeking to promote the use of bio-pesticide against the backdrop of stricter European Union (EU) regulations on pesticides that threaten to cripple the horticulture sector.

Plant pathologist and pesticides expert Virginia Kimani told Seeds of Gold that it is very difficult to prove chemicals’ harmful effects, hence the big debate surrounding their use.

She said that due to the EU food safety concerns that had resulted in a significant drop in horticultural exports, the future lay in integrated pest control approaches that recognise the place of chemical, cultural, biological and mechanical methods.

Experts have often noted that part of the problem with Kenyan horticultural exports is reliance on traditional markets. Data from the Horticultural Crops Development Authority (HCDA) show most farmers are yet to comply fully with the EU rules on maximum residue levels (MRLs).

“There is increasing awareness among their consumers that they need to be food- and environmentally-safe,” she said. She also noted that the EU had become a bigger bloc, meaning, the union had many countries, which were not at the same level of legislation.

The UK, for instance, had specific legislation on pesticide use; not so some of the EU’s newest members.

The EU, she said, based its MRLs on laboratory test levels because there was no field data to back Kenya’s suggested higher levels, referred to as “national tolerances”. She noted that the EU government values national positions of trading partners.

That would have been more realistic as it would be based on farmers’ reality on the ground, Kimani said. What is happening is that the farmers use the chemicals, and by the time the product reaches the EU, it is high because it is not at a realistic level, since it is pegged at the lowest level that the equipment can determine.

EXPORTER’S EXPENSE
“That is how Kenya landed in an official control list where 10 per cent of its produce entering the EU — French beans and podded peas — is set aside for sampling,” the pesticides expert said. And while the 10 per cent is being tested, the 90 per cent cannot be sold until it is cleared.

This does not only entail delays, but that if the 10 per cent is found to exceed the MRL, the remaining 90 per cent is not sellable, and is destroyed at the exporter’s expense.

“That is how exporters have lost money, some of them discouraged to the point of exit,” Kimani said. The EU then informs Kenya Plant Health Inspectorate Service (Kephis) that a particular exporter has exceeded the limit, triggering inspection of the exporter — at his cost. The trader cannot also export during the inspection period — usually a minimum of two months — meaning further losses.

The tough rules also affect some 50,000 smallholders tilling less than two acres (0.8ha) of land, according to a 2012 study by SNV Netherlands Development Organisation.

For these farmers, the horticulture sector is important as it earns them an average of Sh60,000 a year from sale of green beans — the most affected by the EU’s MRL rules. According to the SNV study, the sector employs 45,000 to 60,000 people of whom the majority — 60 per cent — are women engaged in commercial farms, processing and logistics.

Fresh Produce Association of Kenya notes that by February 2013, the second month after the EU rules took effect, the fresh bean industry had taken a 25 per cent dip.

Is there hope or a way out of the chemical pesticides quandary? Yes, according to Dr Jean Maniania — a plant pathologist at Icipe, Nairobi.

Scientists at Icipe have been using insect diseases to develop biological pesticides that leave no residues, and which do not need the standard two weeks that are required before harvesting crops that have been sprayed with the chemical pesticides.

Among the disease extracts they use to develop bio-pesticides are protozoa, viruses, Bacillus thuringiensis, which has been used a lot already in developing Bt cotton, nematodes and fungi. Beans coated with fungi have already shown dramatic results in field tests in Naro Moru.

Much field research has already been done. Dr Maniania says they have been working with a Thika-based company, Real IPM, to bring the bio-pesticides on the market.

Real IPM Managing Director Henry Wainwright told Seeds of Gold in an emailed interview that bio-pesticides are picking up, with many suppliers adding then to their portfolio, so growers have greater choice.

Bio-pesticides leave no residue on the crop thus are safer. Their downside is that “…they need longer to work and farmers need to be patient. They are also no substitute for crisis pest management,” he said.

According to Dr Wainwright, Real IPM, Dudutech (part of Finlay Horticulture), and Biologistics are among Kenya’s bio-pesticide producers, whose products have been added to the official list of the regulator, Pest Control Products Board.

Dr Allan Liavoga, the acting manager for the Bio-Innovate Programme, which is pushing for the adoption of bio-pesticides, said that bio-pesticide technology has been with scientists for a while. “They are partnering with the private sector to develop products that will help farmers mitigate the pest issues by not necessarily using pesticides, which are chemical-based,” he said.

But policy is a problem, hence the recent workshop.

“We have realised that it’s one thing developing a technology, but it is another thing having enabling policy and regulatory regimes that will enable these products to get to the end users, primarily the smallholder farmers in the (Eastern Africa) region,” Dr Liavoga told Seeds of Gold.

POLICIES AND REGULATIONS
“What the programme has done is to create this platform where the private sector has been developing this. The scientists that have been developing this research and the policymakers together with the regulators meet and discuss these issues, hopefully so that the right policies and regulations will be put in place.”

So what after we have these innovations? Does the policy environment facilitate the use of these products? Are farmers aware of this technology?

Is the government aware of it? “Those are the questions that are coming out now,” Dr Liavoga said, “because there is something on the table, and hence the thinking that we should scan our policy system and our regulatory system to be able to advise the government on which policies are enabling and which ones are limiting. There is need, but how do we translate that need into real action?” he poses.

“So what the Bio-Innovate programme has done is to create this platform where the scientists that have been developing this research, the private sector, and the policymakers together with the regulators meet and discuss these issues,” he says.

Partnership with Dartmouth College on Technoeconomic Analysis (TEA): experiences of cohort I students