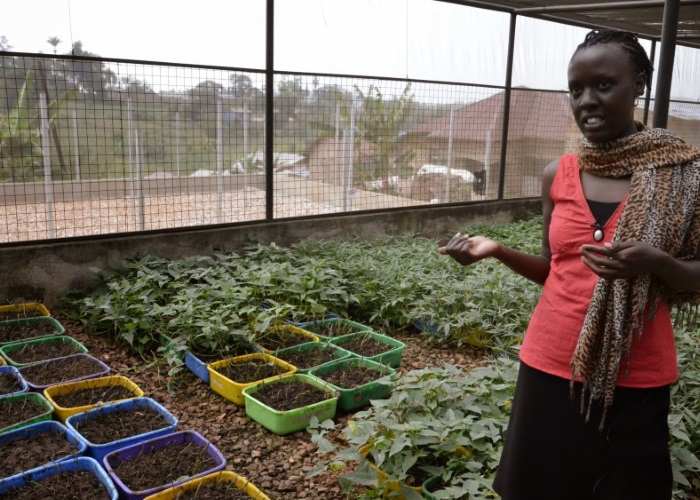 Sweet potato is the second most important tuber crop in Uganda and haspotential to provide food security to many resource poor rural homesteads, and in particular regions that traditionallyhave poor soils and whose weather partners have become erratic ostensibly due to climate change. Unlike other subsistence crops, it can stay in the ground after maturity for between three to five months, thereby providing food for families for much longer.

Its production is however hampered by lack of high yielding vines, disease build up, climate change and poor delivery system of clean vines for planting. Typically famers recycle some of the harvested crop as seed. As a result, farmers are presently losing upto 80% of their produce due to low quality vines and disease.

“Most farmers don’t use clean sweet potato vines because they are not readily available when they are needed,” Explains Dr. Settumba Mukasa, a genetics and biotechnology expert from Makerere University, Uganda. DrSettumba manages the University’s tissue culture lab at Kabanyolo inWakiso, District. He adds, “Often sweet potatoes are planted duringdry spells when vines are not readily available and this means that farmers use whatever they can get. These are often vines that have been used multiple times and have lost their vigour. The vines are bulky,making their transportation from one part of the country to another a big challengeand furthermore, diseases affecting them are not visible to the naked eye and so farmers cannot know that they are using infected vines.”

The Bio-Innovate Africa Program is working with universities, research organizations, the private sector and farmers across eastern Africa to develop and deliver new cultivars that are drought and disease tolerant and that are adapted to various ecological zones. It has also designed andpilot-tested potential models for multiplication and delivery of quality vines.

In Uganda, the program is supporting scientists at Makerere University to conduct trials, diagnose sweet potato viruses and undertake tissue culture for the rapid multiplication of farmers preferred new high yielding varieties. The scientists tested over a hundred lines, but by 2014 had narrowed down to eight, four white fleshed and four orange-fleshed cultivars,that yield above 10 tonnes per acreand these are presently under consideration for official release. The white and yellow fleshed are popular due to their grain matter and vitamin A respectively.

In the model seed delivery system, Makerere University is providing a sizable quantity of clean vines to private labs like Bio-Crop Ltd Uganda who multiply them and sell to village based satellite vines multipliers to multiply them further. One such satellite is in Kikoota village, Mpigi district, some 60 kilometressouthwest of Kampala. It is owned by Vincent Lwanyaga, a50 year old sweet potato grower and entrepreneur. Vincent was one of the farmers involved in the field-testing that scientists from Makerere Universityconducted. He has built a screen housewhich he set up to multiply the vines in a controlled environmentwith help from a community based Organization, CHAIN Uganda. “When people saw the high yields I was getting, they got convinced that planting clean sweet potato vines as opposed to recycling was beneficial and that is what convinced them to come for samples. Since then, they buy vines for planting from me,” He explains. Through this set-up, people from his village of about 500 people have access to high yielding clean sweet potato vines for planting. Vincent is therefore an important cog in this seed delivery system that starts with tissue culture at Makere University. From his sale of vines, Vincent’s life has been transformed and he has not only been able to put his children through school, but also built himself a brick house from the proceeds of this venture.

“Apart from accessibility, the other challenge is acceptability,” explains Apollo Kasharu, the executive Director for CHAIN Uganda. “These vines are not given for free whereas previously rural farmers would get the vines from their neighborhoods for free. From our assessment, this is changing and the presence of private vine sellers like Vincent indicates that there is a growing acceptance of and market for the vines.” He adds.

When laboratories and vines multiplication centres areused, the vines can be prepared during dry seasons and ready for the rainy season. The starting point is to find out promising and high yielding varieties farmers and the market demands. Makerere University identifiesthe intervention required to get the varieties in a clean form.   If the challenge is disease, they use tissue culture processto clean up the vines ready for multiplication. Private multiplication labs acquire these from the university, multiply them further from where village-based multipliers buy and sell to other farmers.