Developing a clean seed system for sweetpotato and cassava: A Bio-Innovate Program initiative 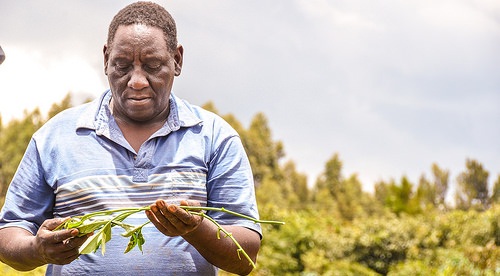 Developing a clean seed system for sweetpotato and cassava: A Bio-Innovate Program initiative

In most of Africa, sweetpotato and cassava are the staple food and nutrition security crops that play a key role as food security and income generating crops particularly when the mainstream crops e.g. cereals have poor harvests.

Cassava is versatile and can also be used for non-food purposes. Extracted starch and other derivatives are used as sweeteners, food, paper, biodegradable products and pharmaceutical industries among others uses.

The FAO estimates global harvest in 2012 at more than 280 million tons. In Africa, NEPAD has prioritize the crop as a “poverty fighter” as cassava is resilient enough to grow successfully under various agro-ecological zones where cereals and other crops cannot flourish – making it a suitable crop for poor farmers to cultivate under marginal environments in sub-Saharan Africa.

For sweetpotato, the International Potato Center defines the crop as the third most important food crop in seven eastern and Central African countries – outranking cassava and maize. It ranks fourth in importance in six Southern African countries and is number eight in four of those in West Africa.

The potential of sweetpotato crop to fight hunger and malnutrition in sub-Saharan African cannot be underestimated. Indeed HarvestPlus one of the Program’s partners has been working on orange fleshed sweetpotatoes fortified with essential vitamins and minerals to fight malnutrition.

The crop hardly requires much involvement beyond planting and can be grown in areas with minimal rainfall. Diseases like sweet potato virus disease (SPVD) have greatly reduced its productivity. This situation is exacerbated when farmers share diseased planting materials.

However, the production of these two crops has been on the decline. The Bio-Innovate Program has in the last three years under its “Enhancing Food Security through Improved Seed Systems of Appropriate Varieties of Cassava, Potato and Sweetpotato Resilient to Climate Change in Eastern Africa” project been working on developing a clean, virus free seed system for cassava, potato and sweetpotato crop in eastern Africa in addition to developing drought- and disease-resistant varieties that are adaptable to specific agro-ecological zones.

KARI has been working with regional partners in this project to developed low-cost tissue culture protocols for farm level production of quality planting materials, and have shared improved technologies for cassava and sweetpotato with their Kenya-based partners and farmers through a 3-tier model.

Dr. Ruth Amata a senior research officer at KARI is taking lead in all these activities. She is generating improved varieties at KARI’s laboratories. The private sector partners then bulk (further multiplication) the clean planting materials and dissemination to small-scale farmers in the region.

How does this collaboration work?
Dr. Amata generates virus free sweetpotato and cassava planting material, which she transfers to GTIL to multiply. GTIL then bulks up the vines at their facilities to strengthen the vines for planting in the farmers’ fields. GTIL then sells the clean planting material to contact farmers.

According to Mr. Edward Mbugua an agronomist who works with GTIL, they have been able to provide over 500 farmers in central and eastern Kenya access to clean vines since November last year.

Moses Njiriri a farmer in Ndeiya, Limuru in the outskirts of Nairobi is one of the beneficiaries under the project. According to Mr Njiriri, through his collaboration with KARI he has sold clean planting vines to fellow farmers in his locality.

Why is it important to establish a clean seed delivery system for sweetpotato anyway?
The current situation is that over 98% of planting materials are disseminated through farmer-to-farmer exchanges and sale of cuttings in local markets. This becomes a problem because diseases are transmitted through infected plant material and cause losses of up to 70% of the crop, severely reducing yields. This creates a cycle, which is repeated, in each planting season.

To further consolidate the gains achieved in the last three years of implementing this project, Bio-Innovate held a meeting in March 2014 that involved Farm Concern International (FCI) an Africa-wide Market Development Agency in this collaboration. What does FCI bring to the table? Farm Concern is working with smallholder farmers organized into commercial villages to add value to cassava and sweet potatoes and find markets for farmers produce. According to FCI, the biggest problem that they have encounter while working with famers is that crop productivity of these crops is extremely low. Even if markets are found for the produce, farmers will not be able to meet the market demands thus making it difficult for the value addition industry to consider these crops as reliable raw materials. FCI is tackling the productivity problem by impressing on farmers on the need to buy and use clean planting material and links them to private sector actors like Mimea and GTIL as a basis of livelihoods improvement through trade. Mimea International Limited will work with GTIL in multiplication of clean sweetpotato planting material and provided these materials to Farm Concern International (FCI) who will then tap into their huge network of farmers to sell these clean planting material.

Farm Concern International will participate in this initiative by leveraging its commercial village-processing project, and is funded to the tune of $144 million to acquire clean cassava and sweet potato seeds for these commercial villages for selected locations in both Kenya and Tanzania targeting over 75,000 farmers.

This inception meeting serves as a forum for the partners to share, discuss and combine previous achievements and activities in creating seed systems for sweetpotato.

According to Dr. Allan Liavoga, Bio-Innovate’s Ag. Program Manager the success of this initiative – slated to end in December 2014, will be a model seed system that can be replicated in the region leading to a vibrant private sector driven micro-propagation industry and the famers have access to these materials.