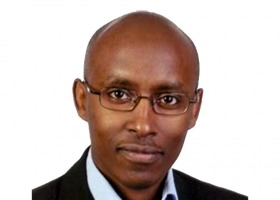 Dr Ignace Gatare is the principal of the College of Science and Technology at the University of Rwanda. Prior to this appointment, he served as the Director General of the Rwanda National Commission of Science and Technology (NSTC), a public institution serving as a think-tank and advisory board to the Rwanda Government on issues pertaining to the development of science, technology, research, and innovation. He also served in the Government of Rwanda as Minister in Charge of Information and Communications Technology, from November 2009 until April 2012.

Currently, he is a member of various governing bodies in national and international institutions and projects including Chair of the Regulatory Board of the Rwanda Utilities Regulatory  Authority, Chair of the Joint advisory board of Carnegie Mellon University – Rwanda Campus; member of the Advisory Committee of the GEONET project (an initiative of the Oxford Internet Institute, University of Oxford, UK);  Steering committee of the Integrated Biological Control Applied Research Program – IBCARP (an icipe initiative), Member of the Executive Committee of the Interuniversity Council for East-Africa (IUCEA). He is currently the Rwanda National Coordinator for AFRA

Dr Gatare attained his undergraduate and M.Sc. degrees in Electrical Engineering, respectively in 2001 and 2004, with major in Telecommunications, from the Mons Engineering Faculty (FPMs), Mons, Belgium. In 2008, he obtained a Ph.D. in Engineering Sciences with specialisation in Photonics from the Vrije Universiteit Brussel (VUB), where he also worked as a postdoctoral research fellow. His research interests include optical switching, optical injection-locking, and synchronization of semiconductor lasers.

Dr Gatare has extensive experience coordinating and supervising several national telecommunications and ICT infrastructure projects including the construction of the 2600km National fiber-optic backbone network and the deployment of the National Digital Terrestrial Broadcasting Television Platform in Rwanda.

The effects of Covid-19 on food companies in Eastern Africa