How Bio-Innovate is stimulating a Sustainable Canning Beans Innovation Platform 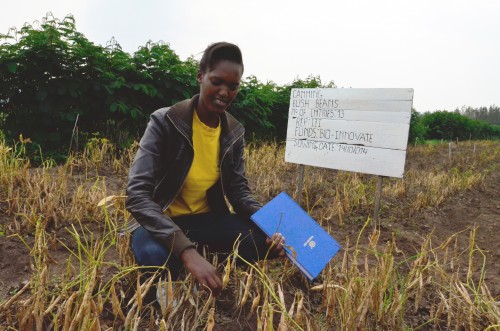 How Bio-Innovate is stimulating a Sustainable Canning Beans Innovation Platform

Over 200 million people in sub-Saharan Africa depend on the bean crop as a primary staple food. Millions of smallholder farmers in this region also rely on the production and sale of beans as the source of household income.

Change in consumer lifestyle and preferences has changed over time with a growing middle class in the region that is demanding a wider range of canned bean products, and preference for fast cooking products. Ethiopia is a large exporter of unprocessed beans to Europe while Kenya has a strong bean canning industry. Tanzania is also a huge producer of beans.

Challenge
For the last 60 years, the canning industry in the region has relied on one particular variety – Mexican 142 – developed in the 1950s and released initially in Tanzania (1940s) and later in Kenya (1960s) and subsequently in Ethiopia (1970s). Over the years this variety has succumbed to diseases such as rust, angular leafspot, bacterial blight and recent frequent drought conditions. It has become uneconomical to produce this variety especially in Kenya and many farmers have abandoned its production. The industry has faced serious problem of acquiring adequate quantities of beans for canning and often operate below installed capacities. In the last two years, the quality of supplied produce –mainly by middlemen has seriously deteriorated, with much of the supplied produce being rejected. To compound the problem, there is no organized production of certified seed suitable for canning that the industry can use when contracting farmers. This is the situation that Bio-Innovate is attempting to correct.

Trufoods, a canning bean factory in Kenya has an installed capacity to produce over 200 tonnes of canning beans but currently only handles 100 tons  due to supply limitations. Furthermore due to the quality of the beans imported from Ethiopia through middlemen, 10% of the consignment is discarded during sorting for not meeting the processing standards. Agriculture Commodity Supplies (ACOS) of Ethiopia, an entity that sorts and packages beans and exports to Europe for further processing is also experiencing  similar problems due to the poor quality of beans produced by local farmers.

Private sector partners include Trufoods and ACOS who are bean processors and seed companies interested in multiplying and commercializing the new lines. The key to this innovation platform has been the involvement of the private sector in Ethiopia and Kenya who have in addition to participating in assessing the performance of these new lines in the field with the scientists, have also contributed to the product development process by conducting industrial canning tests for the candidate varieties to ensure the minimum canning properties are met.

Innovation
The objective of this consortium is to develop better varieties of canning beans with good yield potential, resistance to diseases, drought and very critically, that meets the very stringent industrial canning criteria. The breeding work has been done to combine these attributes in the new lines using germplasm sourced from various institutions who have been working on beans in the region including international center for tropical agriculture (CIAT) and the Pan African Bean Research Alliance (PABRA).

Progress and milestones
Through the breeding work conducted in the past three years, 15 new bean lines of five market classes that meet the industry standards and possess good resistance to that major diseases including rust, angular leafspot, bacterial blight, are drought tolerant and give good yields under farmers’ conditions, have been developed in Kenya and Ethiopia, and are undergoing validation in the respective seed regulatory bodies in the two countries.

It is anticipated that farmers will double their yields by growing the new climbing bean varieties which have a 3:1 yield advantage compared with bush varieties they are growing at present. These beans have been tested widely for their agronomic potential, canning quality and finally for sensory characteristics of the canned products. Through the project these promising lines have been introduced in Rwanda and Burundi.

James Mwaura, a farmer from Bahati in Nakuru County, is one of the many farmers working with the University of Nairobi department of plant science and crop protection, Kabete Campus and Trufoods Limited in the seed multiplication component. In his one-acre farm, he is earning 50% more from his harvest for every kilogram of seed produced compared to other farmers growing beans for food or grain. Neighboring farmers have shown interest in joining this venture. Seed bulking as James Mwaura found out is demanding. Strict agronomic practices have to be adhered to ensure high quality seed with zero contamination from other varieties. The returns on the other hand are better. The seed companies then sell the seed to the food processing companies who pass on this seed to local farmers as planting material for their farms. The farmers then produce bean grain for the processing industry. 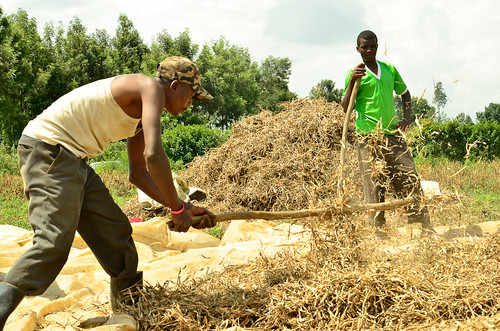 
Future direction and outcome of the project
The next step is commercialization of these new varieties, which is expected to commence as soon as the varietal validation process in Kenya and Ethiopia is complete. In addition to supporting the bioscience component of the innovation, Bio-Innovate will also work with and strengthen the platform for self-sustainability. Once these varieties are commercialized, certified seed will be multiplied in a partnership between the research institutions and the seed companies and availed to contract farmers who will in turn sell their grain produce to the canning industry. Several actors in the canning bean value chain will benefit from these innovations.

The primary beneficiaries are farmers and consumers. Farmers will benefit from reduced losses due to diseases and drought, increased productivity and better returns due to a steady market for their produce.  This project will benefit women to a larger extent because beans are predominantly grown and marketed by women. Consumers of beans will save on energy costs since the new varieties cook much faster (less than an hour) compared to present varieties which require 2 to 3 hours to cook.  This reduced cooking time will also translate into huge energy savings for the process industry and hopefully translate into lower prices for the processed products.

Through this platform, the research partners have exchanged bean germplasm to be evaluated in the different agro-ecological zones in their respective countries.  This collaboration emphasizes a key tenet of Bio-Innovate Program i.e. promoting regionality.