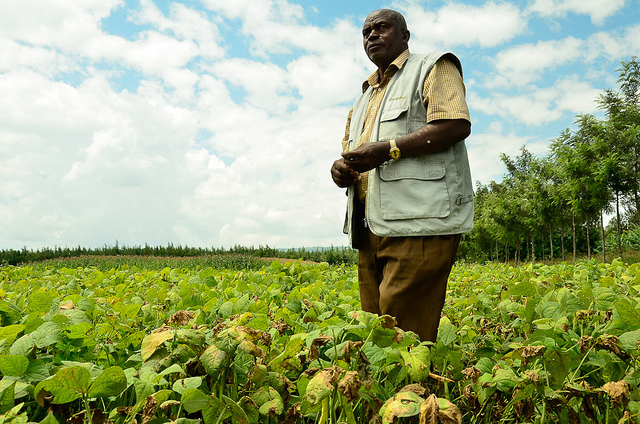 It is some minutes past 1 pm, the sun is blazing, but in the middle of a one-acre piece of plot, James Mwaura smiles as he shows off a promising bean crop. As it turned out, Bahati in Nakuru County, where Mwaura hails from,

is exactly where the country’s hope to produce a new bean varieties that will be canned locally. Mwaura has been that traditional farmer growing maize, wheat, tomatoes and other crops such as potatoes and ordinary beans. 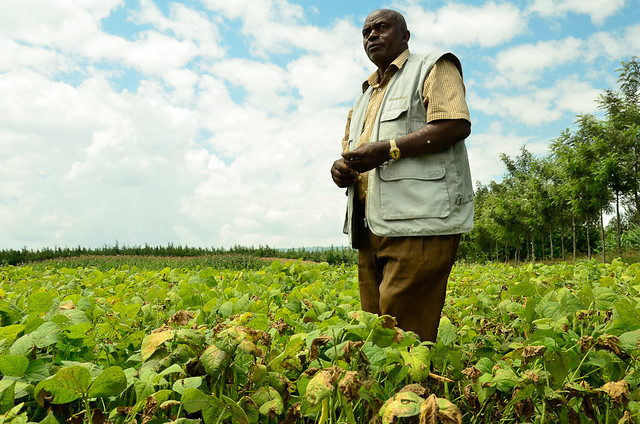 This was purely for home consumption, and surplus for the local market. But last year, the 67-year-old father of six adopted a shift to bean seed multiplication after learning that he can earn twice the price in the market. “I did not know anything before but since the University of Nairobi approached me, I got interested in this seed multiplication project.

Before that I used to grow a variety of crops including beans in a very ordinary way,” added Mwaura who is now braced for the second harvest. He admits there is a big difference from his past farming practice. “My income margins have almost doubled compared with the proceeds from production of ordinary beans combined with all other crop yields,” Mwaura told Business Hub amplifying his current sales, “I sell Sh100 ($1.17) per kg of the new bean variety, 50 per cent up compared to the ordinary bean variety which used to fetch me a paltry Sh50 ($0.5) besides other production challenges.”

Thanks to the project involving 57 institutions including University of Nairobi (UON) and also championed by six countries in eastern Africa, Mwaura has gained knowledge on good agronomic practices, something he did not know. “From last year on this farm, the rule is one seed per hole and not the three to four I used to plant in the past,” observed Mwaura saying; a portion of a quarter acre currently produces two to three bags than it was initially with the one and half bags from the same size of land.

Mwaura is the only farmer in Kenya involved in the Bio Innovate programme on value added bean technologies for enhancing food security, nutrition, income and resilience to cope with climate change and variability challenges in Eastern Africa. Due to the best agronomic practices, Mwaura exudes confidence that his yields now outnumber the cost of the whole exercise of production.

Mwaura has been contracted to grow new improved bean varieties by the University of Nairobi department of plant science and crop protection, Kabete Campus through support of the programme and in partnership with TruFoods Ltd. After visiting his farm, about 10 farmers in the area are currently applying to join the project under the Bio-resources Innovations Network for Eastern Africa Development Programme known in its short form as Bio-Innovate Programme.

Hosted at the International Livestock Research Institute Campus in Nairobi, the programme was established in 2010 to support a multi-disciplinary biosciences and product-oriented innovation activities in Kenya, Burundi, Ethiopia, Rwanda, Tanzania and Uganda. UON lead scientist, Prof Paul Kimani, who is been championing research on the variety for the last five years says with the ongoing developments, Kenyans should expect a formal release of the more varieties to take place towards the end of before mid 2014.

“We hope that now Kenya is going to produce new varieties ,” Kimani said during a tour to Bahati recently. When soaked “The new canning beans cook fast, in 27 minutes when soaked, good energy and time savers for consumers compared to 42 minutes for the old variety,” notes Kimani who said the new bean varieties will be canned in the country setting a standard for value addition and a real move to agribusiness.

The new varieties which food manufacturer TruFoods Limited is said to have secured the rights to can are high yielding compared to other varieties; they increase 100 per cent in size when soaked and have canning and sensory characteristics. Some of the diseases, Kimani said, these varieties resist include angular leaf spot, anthracnose, root rots, common bacterial blight and bean common mosaic virus.

They include small whites (navy), small reds, pinto, carioca, red mottled, red kidney and speckled sugar grain types. The scientist said the ongoing research on the varieties promise to ensure steady supply of high quality beans for the canning industry. Currently Kenya relies on imports because of low and erratic local production due to lack of certified seeds, susceptibility to diseases, drought and low yield potential of available varieties, Work on the bean varieties started at UON in 2007 with selection for drought tolerance and disease resistance. – By George Kebaso
Source