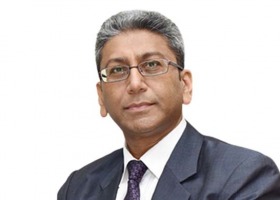 Prof Dhanjay Jhurry is Chief Academic Officer at Mauritius Chamber of Commerce and Industry since 1st April 2022. He previously served as Vice-Chancellor of the University of Mauritius (UoM) from March 2017 to March 2022. He championed the vision of a research-engaged and entrepreneurial university working in close partnership with the public and private sectors as well as with the community to foster innovation. He has put a lot of emphasis on organizing research at the University around the SDGs and has led various initiatives to develop human, intellectual, business and social capital through an inclusive and openness approach. Under his leadership over the past five years, the University of Mauritius has championed the concept of international education diplomacy and built strong partnerships with Universities worldwide.

He held previously (2012 to 2017) the post of National Research Chair in Biomaterials and Drug Delivery under the Mauritius Research Council, while heading the Centre for Biomedical and Biomaterials Research (CBBR), a center attached to the University of Mauritius which he founded.

Prof Jhurry studied at Bordeaux University (France) and received his PhD in Polymer Chemistry in 1992. After spending three years as Research Chemist at Flamel Technologies Company in Lyon, France working on biomedical polymers, he joined the Dept. of Chemistry at the University of Mauritius as Lecturer and was appointed Professor in 2005.

Prof Jhurry worked on sucrose-based polymers for his PhD. His mainstream research in polymer science, biomaterials and tissue engineering, nanotechnology/nanomedicine and drug delivery has led to over 80 papers in scholarly journals, with an h-index of 24.

Prof Jhurry is an elected member of the Association of Commonwealth Universities (ACU) since July 2017 and a member of the Scientific Council of the Francophone Association of Universities (AUF) since September 2019. He is a Board member of the Regional Multidisciplinary Centre of Excellence (Mauritius) since January 2020. He was appointed Chair of the ACU SDG Network in January 2020. He is also a member of Ashinaga’s Kenjin-Tatsujin International Advisory Council (Ashinaga Africa Initiative) and he was designated Fellow of the African Academy of Sciences in 2019.