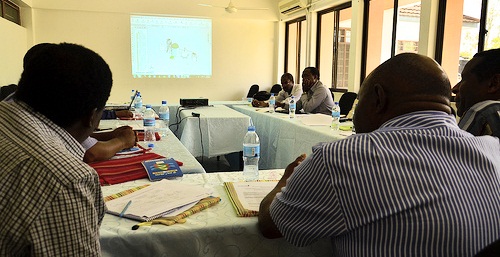 After two years of crippling difficulties in implementing their project activities, Bio-Innovate’s project on biogas and mushroom production from coffee and sisal waste is optimistic of finally completing…

commissioning its pilot facilities that demonstrate use of sisal and coffee waste to produce mushrooms, biogas/electricity and bio-fertilizer by April this year.

Professor Amelia Kivaisi the project leader from Dar es Salaam University and her team, and the private sector partners – Mohammed Enterprises Tanzania Limited (METL) and Tanzania Automotive Technology Center (TATC) presented the progress in implementing their activities to date during a monitoring and evaluation meeting on 30 October 2013 at Dar es Salaam, Tanzania. The Program management team (PMT) was in attendance to conduct the evaluation of these activities.

The Program in June 2013 initiated a midterm review for all consortia projects. The reviewers had less than favorable feedback of some of the project’s components. They particularly questioned the feasibility of producing mushroom from sisal waste from a plantation  based in Kilifi, at Kenya’s coastal region – due to high salinity in the sisal waste. High salt concentration in a substrate cannot support mushroom cultivation.

Dr Suhaila Hashim the project leader of the Kenyan component and her Pwani University team developed an innovative solution to this problem by pretreating the sisal waste before cultivation of mushroom. This is a solution if fine tuned can be used by any entity based at the coastal region where high salinity is a problem. .

A pre-techno economic analysis conducted to evaluate the economic potential of the project showed that it is economically viable. The project is trying to develop and demonstrate an intergrated waste management process that combines the production mushroom production and biogas that can be converted to electrity and bio-fertilizer.

The project has made significant progress in the last one year but has not completed the construction of the required pilot facilities for mushroom and biogas production. The team anticipates to complete this by early 2014. It has established protocols for oyster mushroom and biogas production from coffee and sisal wastes, obtained data for coffee husks, and sisal wastes, and completed a pre-techno-economic feasibility report of the integrated technology.

What remains now is the completion of the pilot-scale mushroom and biogas facilities and optimization data collection. In addition, an intellectual property audit was conducted to evaluate potential patentable technologies and whether a freedom to operate analyses should be conducted.

The Dar es Salaam meeting provided the Tanzania component partners with an opportunity to critiqually look at the challenges and set realistic project completion deadlines.

The Tanzania Automotive Technology Center (TATC) team presented the biogas digester blueprints. Engineer Deo Renati Masoy the Estate Manager in charge of the construction had to reassure the PMT that the digester, a key component in the biogas generation system, would be ready by early 2014.

“It’s our expectations that the set up of the plant will be ready by mid February 2014, but optimizing the digester leachate to produce gas will take more time. Construction materials are available locally except for the slurry pump but an order is already place, to be delivered by mid December 2013”, Eng. Deo Renati Masoy explained. In this case the leachate is the mix of waste.

After the digester has been installed, it will take another 4-5 weeks to start it and acclimatize the microorganism optimally. The project team is confident that the digester will produce biogas in the first week of April 2014. The system will be self-sustaining, and the TATC will schedule maintenance to ensure it runs smoothly.

Professor Kivaisi describes the production capacity of the biogas system. “The 10m3 plant is expected to produce 1200m3 of biogas per month from 4000kg of spent sisal substrate (remnant sisal waste after harvesting the mushroom). With electrical conversion efficiency of 35%, the plant is expected to generate 2568KWhr of electricity every month”, the professor described. 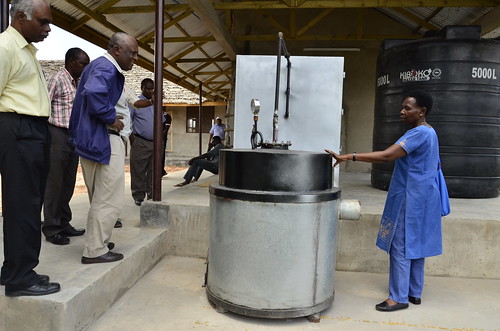 “However, it should be made clear that task of the project is to demonstrate the feasibility of the technology and does not mean that the biogas plant being installed is the right size and capacity to meet the factory needs. Once demonstration has been done, it will be up to METL to scale it up to the desired capacity,” she added.

The mushroom facility at the METL sisal plantation located in the Coast region, in the outskirts of Dar es Salaam is a few weeks shy of completion. The METL is eager to adopt the innovation. The plantation aims to consume all generated waste once the project team has demonstrated that the whole system from mushroom cultivation to biogas and biofertilizer production can be done in a profitable and sustainable manner.

This and the other agro-industrial waste management project managed by the Program is an illustration of taking innovation closer to the market place. These projects are pushing research outputs closer to the end user in the eastern Africa region, to deliver solutions for the agro-industry sector that have experienced challenges managing waste from their industrial processes.

The Program has been highly encouraged by the enthusiasm shown by the private sector partners. These agro-processing partners are interested in investing in the technology scale up and the Program will provide technical support required though the scientists involved in the project.

Bio-innovate plans to hold a regional workshop that will assemble key stakeholders in the environmental management sub-sector to deliberate on the policy impediments and incentives that need to be addressed to motivate the agro-processing industry to invest in waste management technologies as a way of reducing environmental degradation due to poor waste disposal – a huge problem in the region.

This forum will include government officials from the environmental management dockets, the private sector and other interested stakeholders. It will serve as an avenue to disseminate the innovations to other interested agro-processing companies in the region.