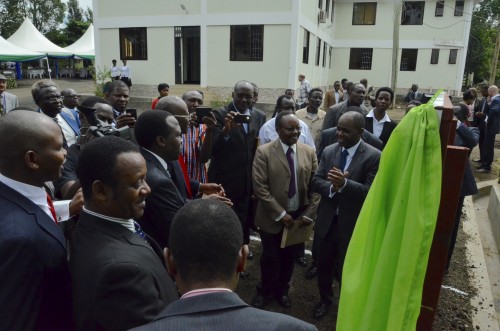 The Tanzania Minister for Communication, Science and Technology Prof. Makame Mbarawa on 28th April 2015 presided over the official opening of the SIDA funded wastewater

treatment and biogas generation project at the Banana Investment Limited winery plant at Kijenje-Mwanama, on the outskirts of the city of Arusha.

The minister praised the wastewater treatment and biogas generation initiative for practically demonstrating what he termed as the three pillars of successful research – academia, government and the private sector. “This project has demonstrated that integrating science, research and technology with private sector can provide solutions to industrial challenges and on behalf of the Government of Tanzania, I would like to thank the Swedish government for investing its tax payers money into this project and for supporting the Government of Tanzania in many other ventures apart from this one,” Said Prof. Makame.

The Minister commended Banana Investment Limited and its managing director Mr. Adolf Olomi for investing an additional 170,00USD into the project saying that as an investor, Mr. Olomi would have easily have put the money to other for profit ventures, but instead chose a noble investment of making sure that waste from his company does not negatively affect the neighbouring community. Prof. Makame said that industrial pollution is a serious challenge and asked the National Environmental Management Council, NEMC, Tanzania to ensure that other industries emulated the example of Banana Investment Limited. The minister informed the gathering that his government will be investing 100 billion Tsh to science and technology this year and said that part of it will be used to support some 370 Ph.D students from Tanzania. He said that this is informed by his belief that research done elsewhere cannot solve challenges facing Tanzania and hence the need to build capacity of Tanzanian researchers.

Speaking at the same function, the Managing Director of Banana Investment Limited revealed that by using biogas from the wastewater treatment process, the company was saving 100 litres of fuel per day and this adds up to 36,000 litres annually. He noted that if other industries in Tanzania did the same, it would result in great saving on the country’s energy costs as well as individual companies’ operational costs.

Over 200 people from various sectors attended this function. Among them was the Mayor of Arusha, representatives of four universities; University of Dar es Salaam, Nelson Mandela African Institute of Science and Technology, Sokoine University of Agriculture and St Agustines University of Tanzania. Also in attendance were government agencies namely the National Environmental Management Council, NEMC, Tanzania Commission for Science and Technology, COSTECH, private sector people and several polytechnics.

This wastewater treatment project is treating 100% of the Banana Investment Limited’s 80,000 litres a day wastewater and in the process generates 100,000 litres of biogas that runs two of the companies’ eight boilers and sledge used as fertilizer. This wastewater previously drained into the nearby river Kijengi, making it unusable for downstream communities who need it for domestic use and for their livestock.  Such river waters often drains into large water bodies affecting fish, which is a source of food and income for nearby communities. Plans to pipe the treated wastewater back to the community are almost complete. This project is a culmination of five years of research done in collaboration with scientists from University of Dar es salaam, the Nelson Mandela African Institute of Science and Technology, with financial support from the Swedish International Development Cooperation Agency (SIDA), through the Bio-Innovate Africa program.