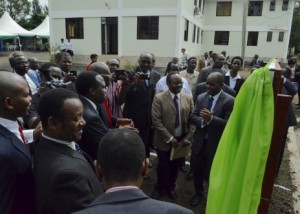 Before the project begun, Banana Investment Limited was considered a bad neighbour just like 90% of factories in Eastern Africa. This is because it was not properly treating the 80,000 litres of wastewater from the banana wine manufacture that was sometimes getting into the nearby river Kijenge located next to the company’s plant in the Kijenje-Mwanama section of Arusha City of Tanzania. River Kijenje is used by the neighbouring community and people downstream for drinking, cleaning and for watering their livestock.

All this however begun to change five years ago after scientist from the University of Dar es Salaam, with support from Bio-Innovate Africa developed an integrated wastewater treatment facility for the plant. “The purpose of our engagement with this project was to show that industrial solutions can be solved by proper collaboration and integration with local scientist,” Says Prof Karoli Njau, the lead scientists on the project from the Nelson Mandela University. The university is working with the University of Dar es salaam on this project.

“Presently, 100% of our wastewater is treated to not only generate biogas, but also provide fertilizer and eventually recycled water for the nearby community for irrigation and in the process we save 100 litres of fuel per day and this over a year amounts to 360,00 litres savings,” Said Mr. Adolf Olomi, the company’s managing Director. He was speaking during the official launch of the SIDA funded wastewater treatment plant on 28th of May 2015 that was graced by the Tanzania Minister for communication science and Technology Prof. Makame Mbarawa.

The minister praised the wastewater treatment and biogas generation initiative for practically demonstrating what he termed as the three pillars of successful research – academia, government and the private sector. “This project has demonstrated that integrating science, research and technology with private sector can provide solutions to industrial challenges and on behalf of the Government of Tanzania, I would like to thank the Swedish government for investing its tax payers money into this project and for supporting the Government of Tanzania in many other ventures apart from this one,” Said Prof. Makame.

The Minister commended Banana Investment Limited and its managing director Mr. Adolf Olomi for investing an additional 170,00USD into the project saying that as an investor, Mr. Olomi would have easily have put the money to other for profit ventures, but instead chose a noble investment of making sure that waste from his company does not negatively affect the neighbouring community. Prof. Makame said that industrial pollution is a serious challenge and asked the National Environmental Management Council, NEMC, Tanzania to ensure that other industries emulated the example of Banana Investment Limited. The minister informed the gathering that his government will be investing 100 billion Tsh to science and technology this year and said that part of it will be used to support some 370 Ph.D students from Tanzania. He said that this is informed by his belief that research done elsewhere cannot solve challenges facing Tanzania and hence the need to build capacity of Tanzanian researchers.