The year at a Glance: Major Highlights of 2013

BioInnovate Africa/News/Blog/The year at a Glance: Major Highlights of 2013 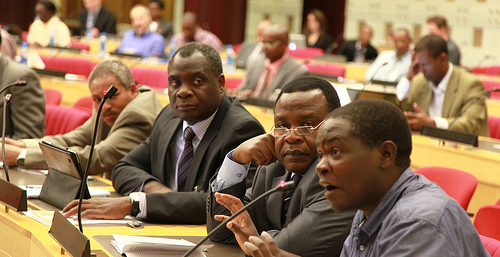 The year at a Glance: Major Highlights of 2013

The conference was held in Addis Ababa, Ethiopia on 25-27 February.

Over 150 participants including scientists, government officials, private sector players, donors and other developmental practitioners attended this event. A total of 35 scientific papers and 22 posters were presented at the conference under the four thematic areas: (i) Climate change adaptability productivity and improvement for food and nutrition security; (ii) Waste treatment, bioenergy for renewable bio-resources, and securing freshwater resources; (iii) Innovation incubation and promotion of targeted value chains; (iv) Bio-resource innovation policy and sustainability analysis.  Productive interactive sessions were also conducted to distill and identify action points on how best to create and sustain an enabling environment in the region to support the development and uptake of bioscience innovations.

Program Mid-term Review
The agreement between ILRI, the host institution and Sida requires that the Program undergoes a review mid-way through the implementation period.  An extensive review was conducted between January and April 2013 to evaluate the relevance, effectiveness, efficiency and possible impact of Program based on what has been accomplished to date and is expected by end of 2014 when the Program ends. The evaluation recommended on areas of improvements for successful completion of current and planning for the next phase including: (1) creating institutional feedback and learning culture from past mistakes and consolidating the successes; (2) strengthening program leadership and management at all levels; (3) creating and supporting champions of change within the scientific community who are forward thinking and with entrepreneurship acumen; (4) encouraging development of technology packages with realistic techno-economic analysis that guide scale-up and scale-out activities; (4) establishing exemplary innovation platforms as a foundation to the establishment of viable innovation systems involving strong private–public partnerships that allow sufficient interaction with delivery agents; (5) harnessing the power of a regional innovation platform and better understanding of policy environment that stimulate widespread adoption of these innovations.

As a follow through to the mid-term review: a comprehensive review process for all the projects was undertaken in line with on Program core principle – linking research and innovation activities with product deployment agents and end user; Program management has been strengthened both at TAC and PMO level to inject innovation commercialization expertise and experience; Program partnered with Switch Responsible Ventures (Stockholm, Sweden) and Strathmore University business school (Nairobi, Kenya) to conduct techno-economic analysis and development of business plans and intellectual property audit, respectively, for the projects to evaluate commercial viability for eventual commercialization of innovations; the quality of the interaction among the partners particularly with the private sector has been enhanced with the PMO taking a much more proactive approach in ensuring the interactions are seamless.

Intellectual Property Audit of Innovations
To support the commercialization process, the Program commissioned an intellectual property audit for the five technologies discussed with the two main objectives (i) identifying patentable technologies; (ii) determining whether there is need to conduct a freedom to operate assessment to identify potential risks of liability toward taking such technologies to market, and if there was need to evaluate such risk. The information generated from this exercise will support subsequent commercialization processes.

Bio-Innovate Phase II Conceptualization
Phase I of the Program is expected to end in December 2014. During the last quarter of 2013 the PMO initiated the process of developing a proposal to solicit for funds for the second phase earmarked for 2015 – 2019. The process will entail development of a concept paper outlining Bio-Innovate Phase II ideas to be deliberated upon by regional stakeholders including the national councils of science and technology and AU-NEPAD, and thereafter submitted to donors for their opinion and input. Only after this initial consultation process will the full proposal be developed by a select group of drafters from the region, a process that is expected to end by June 2014.