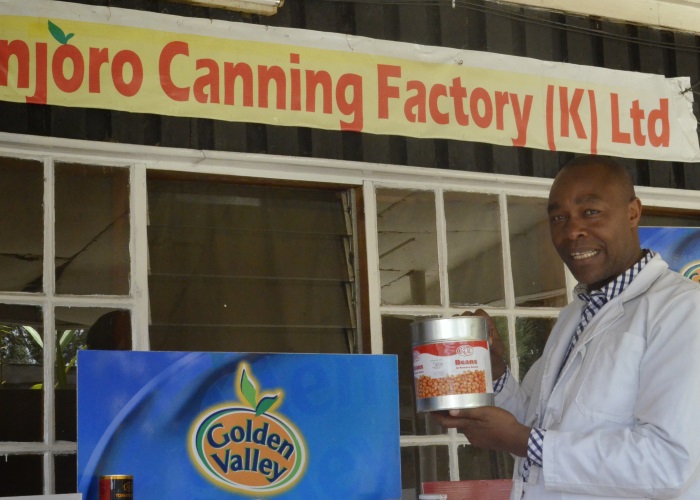 Beans is the most important source of protein, iron and zinc source for resource poor communities in Eastern Africa. With a growing middle class and steady international market, canning beans has potential to become a major cash crop for farmers. However its production is hampered by lack of high quality seeds.

Bio-Innovate supported scientists from universities and national research organizations to produce nine new high yielding, disease and drought tolerant canning bean varieties that have been released in Kenya and Ethiopia and are being tested in Tanzania, Burundi and Rwanda. This initiative was done in collaboration with private sector partners in the canning beans industry that are expected to provide the eventual market to the farmers.

As we speak to the private sector partners in the canning bean sector in Kenya one cannot fail to note their excitement over the new canning bean varieties that were released in March 2015.

“We are planning to raise our production of canned beans by over 100%, and with the newly released varieties we are confident we shall reach there,” Says Mwangi Njiru, the Operations Manager at Trufoods, a company based in Nairobi.

Access to high quality canning bean seeds by farmers in Kenya has been a great challenge. For over sixty years, farmers relied on the Mexican 142 white canning bean variety, which due to over use had become susceptible to drought and diseases such as common mosaic virus and angular leaf spot. With zero produce coming from Kenya, the canning bean industry relied on imports from Ethiopia. However that supply line has not been stable.

“Prices fluctuated due to various factors that we did not have direct control over, furthermore we were not getting the quality of beans we preferred and ended up discarding as much as 10% of the produce delivered,” Says Evans Njuguna, the Operations Manager at Njoro Canning.

However, after three years of lab research, research station and on farm trials, scientists from the University of Nairobi-Kenya and Kenya Agricultural and Livestock Research Organization (KALRO (formerly KARI) with support from the Bio-Innovate Africa program have developed and released five new canning bean varieties for Kenya. These varieties were developed from germplasm that already existed in the region but for the first time the food processing industry was involved in developing them by testing their industrial quality.

“This is a major development, because it is the first time that a new canning bean variety has been developed locally,” says Prof. Paul Kimani, the lead scientist from the University of Nairobi. “These new varieties are drought and disease tolerant and because demand for them was driven by the private sector players in the canning industry, their sustainability is guaranteed.” Adds Dr. Davis Karanja the national coordinator, grain and legume and the project leader.

The research involved farmers from across various ecological zones in Kenya and within research stations. Mzee James Mwaura, a bean farmer from Bahati Location in Nakuru-Kenya, has been a bean farmer for four years. He has a nine-acre bean farm and was one of those selected for on-farm trials. “I grew this new variety (Kenya Cheupe) and as an experienced bean farmer I can tell you that this is the kind of bean I have been looking for.” Says Mzee Mwaura. Whereas we didn’t get much rain, I still got a good harvest and I believe with this I can get three times what I used to get. From an acre I can get nine bags where I used to get three,” He adds.

Kenya has a well developed caning bean industry that has been operating below capacity due to absence of beans. The new bean varieties, some of which show up to 60% increase in yield, could be a steady source of income for the farmers that will be contracted to produce the extra 400,000 tones and 200,000 tonnes required annually by Trufoods and Njoro Canning respectively. Trufoods and Njoro Canning are important private sector players in the canning bean industry in the region and with their involvement, over 50,000 canning bean farmers will directly benefit from ready market for their produce.

Apart from Kenya, other regional countries also developing new canning bean varieties are Ethiopia, Rwanda, Tanzania and Burundi. In Ethiopia, where beans is the most important export commodity, one variety has been released. Awash 2 was released in 2013 while Rwanda is in the process of releasing three other varieties.